On Sunday night I was scootin’ around the track and I started thinking about what I’ve learned over the last month.  After a two and half month running hiatus due to an “injury” (medical issues totally count!) I am trying to put my running fitness back together.  Currently, it looks like the aftermath of a game of Jenga.

Since I thought this advice was pretty darn good, I thought I would share it.

1.  Revaluate your expectations – running is one of those fickle sports where it looks like it should be easy!  I am not referencing the runners who belt out 4 min miles, this looks hard for everyone.  But when you see someone outside running, I am fairly confident that most people believe, deep down, they could do that.  Maybe not mile after mile but certainly for a little bit.  Then you hit the pavement and you want to vomit.

2.  Be okay with starting at the beginning – my first few runs back my goal was to hit some 6 milers maybe a 10:30 pace, no big deal.  Hmm… you can imagine my chagrin when not only was this a big deal but I couldn’t do it.  I was kind of shocked because it wasn’t THAT long ago that I could.  I mean, we are talking weeks here people, I didn’t take a year off or anything.  But I did sit on my bum.  Yeah, that’s the end of the sentence because that is all I did.  John over in England was recovering and he did a Couch to 5k to get back into shape.  Me?  Well, I hit the three mile mark and do a jig!  Accept starting over – better yet, embrace it.

3.  Wear your gear – don’t let me catch you saying anything like, “well, I’m not a real runner – these converse running shoes and all cotton outfit totally work”.  Umm… no, they don’t.  You are an athlete!  Treat yourself like one!  Some of my running stuff made me uncomfortable because it was too tight.  I sucked it up and bought some new clothes because I have to be comfortable with myself in order to get out there (Old Navy has some great tanks and capris for cheap).  I immediately felt more confident.  Put your compression socks on after a run – even if you didn’t run 20 miles, your legs might feel like they did.  Pay the money for shoes (and other running gear) and feel confident in the title, “runner”.

4.  Stop comparing – I know people talk about this all the time but do what you can to put what others can do or what you used to be able to do out of your mind.  It’s so defeating and is extremely detrimental to your training because sometimes it just makes you want to give up.  Maybe this means you run “naked” – no garmin, no watch, whatever.  Maybe it means not reading some blogs anymore (don’t worry, you can stay here!).  Maybe it means telling yourself, “I am OUT HERE!  I am doing great!”  Whatever works to get these negative thoughts out of your head – do them.

5.  Don’t make every run an ego-busting one – I have a couple of different routes I take and one of them is an Uncle Jesse “have mercy” route.  It contains the hill that I measure my fitness by in addition to quite a few other beastly uphills.  Then there is another route that is nice and flat and leads to the track – ahhh, this one doesn’t make me hate my life so much!  It’s great to challenge yourself but choose the easier course a few times in-between so you can come home and say, “that was a fantastic run!”.

6.  Undoubtedly either he or she will show up – we all know who this is… the quintessential RUNNER.  He or she seem to be sweating just the right amount, look like they were gazelles in their former lives and they of course look fabulous.  This is when my green-eyed monster flairs up and I feel like the dumpy version of the gazelle who was so slow they were eaten by a lion. 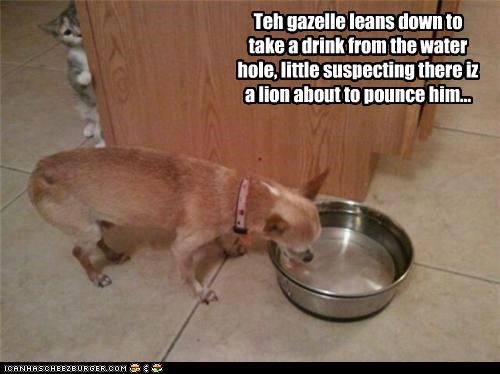 Nevertheless, carry on runner friends.  It seems like it always happens to me and once I get over being a brat, (and they smile at me so then I really feel like a jerk) I realize we are all out here together.

7.  Mind games aren’t just for the bar  –  I mentioned running without all the gimmicks but spicing up your running routine is a great way to give it a new perspective.  Do you always wear headphones/music?  Try going without or load all of your favorite songs right at the beginning and keep telling yourself, “I’ll walk at the sucky song”.  Did you used to have a song that really pumped you up at mile 15?  Bring it to the beginning because maybe your mile 15 now feels like mile 2 (just me?!).  Meagan plays with how far she has already gone so she keeps running and then ends up being farther ahead.  On the track, choose an outside lane so you get more bang for your buck with each round.  Go with friends, join a running group, tweet the ever-living crap out of what you are going to do, want to do – whatever!  Do some fartleks and run faster from one street light to the next – this helps your overall pace and saying you did fartleks is, well, funny.

8.  Take care of your body – this falls into the stretching category… yes, I do realize this is ridiculous for me to highlight since I am a terrible stretcher but it’s very important.  Stretch no matter how far you ran and look into a foam roller or a tennis ball or something to help get those kinks out.  Your body will thank me later.  This is a good time to mention staying hydrated, if you are outside wear that dang sunscreen and buy a visor and be amazed at what your body can accomplish.  Body love friends.

9.  Celebrate!  This one is probably the most important – give yourself an “atta boy/girl!” with each milestone.  If you run a mile nonstop, DO NOT undervalue this!  Don’t say, “yeah, but it’s only ONE mile” – could you run that before?  During my current routes there are two places where I take walk breaks (there used to be three!).  Each day I run a little further or start a little earlier and then I make sure to congratulate myself on the progress.  They might seem small but it’s solid progress and it’s exciting!  I love it when I start to see more definition in my legs from running or I got up that *^$#@ hill that the week before beat me.  Or when I look down and see a pace that has been elusive for a bit – all of these things are achievements that make running great so don’t sell yourself short!

So there is my advice.  Can I say it kind of bugs me there is no number 10?  Haha, oh well, I’ll get over it.  I hope this advice helps.  I don’t always follow it but I am trying.  And I didn’t count on having to take my own advice but by starting over I am becoming a stronger athlete.  For a little while there I was demanding so much from my body without the proper training.  Since I would rather not have a mutiny on my hands, I am rebuilding my strength, fitness and running confidence – one damn step at a time!

2 thoughts on “new runner? returning runner? I can be your rafiki!”