Settle in… Are you ready for this?  I crossed the finish line.  I completed my 4th marathon.

Let’s get down to business.  I took Friday off from work to mentally prep for the weekend ahead and to rest my legs.  Saturday morning I woke up with a wicked headache.  I mean, the start of a migraine and it freaked me out since I had a drive ahead of me.  Then I also started to get really nauseated.  I’m certain it was all stress related so I tried to nip the headache away along with the tummy troubles and I managed to only be behind by about an hour or so.  The drive to Detroit was also weighing on my mind as drivers there and along the way take no mercy.  The speed limit is 70, I drive 75, maybe 78 and I get passed like I’m going 50.  Scary.

I arrived safely and found the expo easily enough (thank you GPS!).  Parking was a whopping $10 in the garage but finding parking on the street would be silly.  My trepidation grew as I climbed the stairs to the expo and then it greeted me with open arms!  Bib pick up was first and I immediately considered mine a good omen.  It was blue, my favorite color and my age was part of my bib number.  I then purchased the following sweatshirt:

This is important as it plays a role in my finishing this race.

The expo was larger and it dawned on me how big this race was.  Also, I realized this was my first non-specialty race – I’ve only done the Nike Women’s marathon, the Disney full and then the Dopey.  I don’t know why, but this felt different.  A bunch of places were selling these throw away gloves because it was going to be 35* at the start.  I caved.

My right knee has been hurting me since June (well, off and on for some time before this actually) when I ran the duo 5k/10k on the slanted sidewalk.  There was a sports PT person there and I had him tape up my knee – my pesky patella. It felt better (driving over had aggravated it) and stabilized.

My hotel room sucked.  I learned the shower head didn’t work, so a bit of sponge bath was needed in the morning.  It wasn’t all the way clean and there was shenanigans the whole night through from other guests.  It was only a mile away from the race start though so I pushed those concerns aside.  Since I gave up gluten I can’t figure out a good pre-race meal and I chose this:

Bad idea.  Why didn’t I just put a lead ball in my gut and call it good?!

Race morning.  I woke up on time, got dressed in my splendid new compression tights, thanked my good sense to purchase the gloves and finally got out the door.  I packed up my car and started along.  I was slightly nervous about walking through downtown Detroit in the dark but I quickly found a fellow runner to walk with.  We got to wait inside the conference center until it was time to hit the starting line.  First of all, it started snowing a bit, which just made me laugh.  I looked around me and I didn’t see any other blue bibs – just the orange international 1/2 marathon ones.  Was I in the wrong line?!  I was in one of the last wave of runners so maybe this was part of it?  I still asked three different people and remained confused for a good chunk of the race. My anxiety was a bit high anyway since the cut-off was 6 and 1/2 hours and my lack of training gave me reason to believe I was in danger of not making this.

Go time.  I started out at my manageable pace.  When we hit the bridge to Canada, the Ambassador Bridge, the sun was peaking through the clouds and I couldn’t believe I was really doing this!  The bridge is long and up hill for the first part.  I walked it.  Then ran down the other side – yay! I love downhills!  We ran through Canada for a few miles and then we crossed back onto U.S. soil through the underwater tunnel.  Everyone talks about how bad this part was but I didn’t mind it – I was warm (I was cold the entire race).  When we came out of the tunnel we ran through customs and then they had a sign welcoming us back to the U.S.  They were announcing some names as they crossed and I was one of them!  “Welcome back Amy German”!  It was neat.  It was a beautiful, albeit chilly fall day and the hilly course was great.  I love the international aspect!

By this time, my knee was seriously bothering me.  I think it started around mile 6 or 8 – I can’t remember now.  My strategy for the race was to run/walk it and this was working well for me.  I even had a couple of negative splits.  The marathoners split from the 1/2 folks as the 1/2-ers were crossing their finish line (slightly cruel to us who were only half way finished) and I considered crossing this finish line because my knee was hurting.  A smarter runner probably would’ve quit but I knew I would ALWAYS wonder if I could’ve made it to the end.  So I kept running.  The miles ticked on and my knee got worse.  I would run for as long as I could and then when it started to give out, I would walk for a bit.  The first steps back into running were beastly but they eased as I kept going and the cycle repeated itself.

An awesome member of the crowd built a pretend brick wall to run through around mile 18.  I loved it.  Another 1/2 marathon (the U.S. only route, the other 1/2 was international) started soon after I got through the 1/2 way point, so they would go screaming past me at certain points.  Umm – rude, haha.  They had 18 water stops as we weren’t supposed to carry liquids across the border.  I did a great job of hydrating the days before the race and during.  I fueled decently – my 1/2 of a ham sandwich in the morning was brilliant idea!

The last 5k I was basically throwing my bad leg/knee ahead of me as I ran and even walking painful.  Right at this moment, someone along side of the course said, “Amy!  You’re DOING IT!”.  I teared up at this point.  It’s really hard to run and cry so I pulled myself together.  When the finish line came into view, I started crying again and of course as I crossed.  My official time was 6:02.  My Nike app said I completed all 26.2 at 5:58, which I like better! 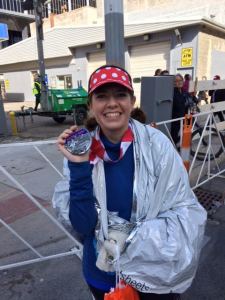 My heart didn’t swell with pride after my first marathon.  It didn’t after my second either – that one kind of crushed my soul.  Dopey did because of the major undertaking.  The Detroit 26.2?  It gave me the same overwhelming sense of accomplishment as Dopey.  I really wasn’t sure I could finish.  Everyday for three weeks I considered dropping out of the race.  I shouldn’t have finished – my last long run was back in the beginning of Sept and it was 11 miles.  The fact that I could barely walk after didn’t matter.  This race made me feel strong and reminded me of my fierce fighting spirit.  Grit and determination (support/cheers from family and friends, compression tights, extra strength tylenol and that newly purchased sweatshirt I wanted to wear with pride) got me through this race.  So many freakin’ emotions were going through my mind, I’m not even sure I can adequately express them.  I made it.

And I didn’t get swept by the people zamboni – WIN!

5 thoughts on “my detroit 26.2 recap… I cried triumphant tears.”