I’ve started to figure out that when Simon gets all ornery and doesn’t want to eat that he doesn’t feel well.  Yes, I am extremely perceptive and it’s only taken 7 years to put this pattern together.  I was waiting on the vomit since yesterday morning.  It was a sign

Sure enough the day was obnoxious.  I was irritated for the entire day and it just felt like everything was a process.  By the time I got home at 5:30 pm, I was beat.  REI processed my return incorrectly and rather than giving me a refund they sent me a gift card.  I wasn’t amused.  20 minutes on the phone did not resolve this issue but Simon finally puked so I guess some of the suspense was now over and maybe the crabby day would be done.

Thankfully I had my sweatpants and this to make me feel better :

I realize I shouldn’t be eating my stress away but a) this is my favorite ice cream ever and Kzoo finally got a Baskin Robbins and b) I decided I didn’t care!

Meanwhile, I haven’t been able to stop my fingers from googling races.  Yay!  Since my joyous reunion with distance running a week and a half ago I’ve been itching to hit the “register” button.  On.Every.Race.  It’s like I’m in an alien tracking beam.

Thankfully, I’ve held off… for the moment.  I know there are always races that I’ll sign up for along the way.  This year I don’t have a major destination marathon in the works.  I am going to do the Detroit Freepress Marathon in October (as long as time off works).  Detroit has garnered rave reviews and the fun fact of running over the border and into Canada and back is nifty.  The medals have a car on them, too.

I let my coach know, I want to cross the finish line of a 1/2 marathon in under 2 hours this year.  Jamie totally thinks this can be done.  I do agree with her, however, I want to give myself two options to achieve this: 1) Sunburst 1/2 in South Bend, IN.  You get to run through the Notre Dame stadium for the end of the race and proceeds benefit the NICU where my friend’s baby spent the first few days.  Race day is May 31st.  2)  Park to Park in Holland, MI.  I did this race this past Sept and it was my return to distance running.  I cried a bit as I hugged the pacers since they played a significant role in me finishing.  This race is Sept 27th.

Of course there are always a ton of other options with regards to finish lines.  I’m positive something else will catch my eye and I will figure out a way to register and run.  The Flying Pig marathon is one I’ve had my eye on and hopefully 2015 will be the year I can sign up for this little piggy!  Then there are 10k’s (my favorite) and 5k’s (less favorite) that I do every year as well.

How do you decide which races to sign up for?

Do you like to run the same race over and over?

I composed a large amount of this post on my run last night.  My anger run.  Are you familiar with such a thing?  Essentially, I had hate for everything and if anyone/thing made me mad in the previous 24 hours I was angry all over again.  This is super healthy.

But running is a damn good way of dealing with it.  Especially since I originally attempted to deal with it by eating two handfuls of Trader Joe’s deliciousness and it just didn’t work.  Pity, since eating these was a lot more fun then hauling my ass around in the heat.

1.  My boobs and bum are a size bigger than they used to be… there is a whole lot of jiggling and bouncing going on and it’s embarrassing.  It makes me very self-conscious.

2.  I’m slow as molasses right now.  And huffing and puffing just to get through a few miles.  Boo.  I knew getting back in shape would be tough and clawing my way back from a mental “injury” is hard because there is nothing physically wrong with me.  So then I just turn on the internal angry monologue…

3.  I went on a date last week and it didn’t go as well as I had hoped.  Or rather there wasn’t that “spark”.  Then I felt badly because I knew I was comparing him to a couple of other guys I’ve dated and that isn’t fair.  But still… WHERE IS HE ALREADY?! 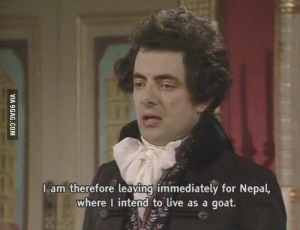 4.  I had some epilepsy issues last Friday.  I hate this.

I saw this yesterday and decided to embrace this philosophy

Sorry for the language but seriously, there is nothing I can do about the above except keep pushing forward.  My boobs and bum are only going to get smaller if I keep running.  Same thing with getting back in shape and getting faster.  As far as the dudes/dating world… well, I don’t have an answer for that one.  Apparently, I am going to end up alone with 10 cats who are going to eat my face off when I die in my apt and no one knows.  Maybe I should start collecting the cats now.

I did call my doctor after much prodding from my dear friends.  I was hoping it would just go away on its own (denial at it’s finest).  Turns out my doctor thinks it’s more related to my migraines so this is a plus.  I do have to stay on some old meds for a few more weeks (or possibly long-term) but if it means not having dizzy spells then I will adjust.

I told you there was whining ahead!  When I got back from the run I did feel better.  Maybe not completely soul-cleansing but I was a lot less hateful, which does everybody good – including me.  And I had an epiphany about how to arrange my apt in between feeling sorry for myself so there’s that, too.

Oh and then I got mad at Mary Poppins.  Because you know, this is completely normal.  Seriously though – I snap my fingers all the time and the mess stays put!  What happened to jumping back to its rightful place?!  And what about this spoonful of sugar helping the medicine go down business?!  When I was transitioning these last two and half months, I stuffed myself with sugar and guess what?  It didn’t help!  Lies, Mary Friggin’ Poppins, LIES! 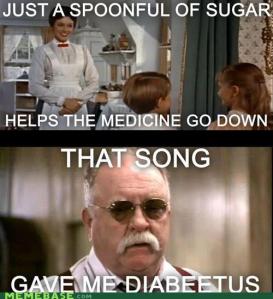 ADDED:  This afternoon I had a meeting and it was highly entertaining.  I laughed… a lot.  It helped with my stabbiness attitude, too!